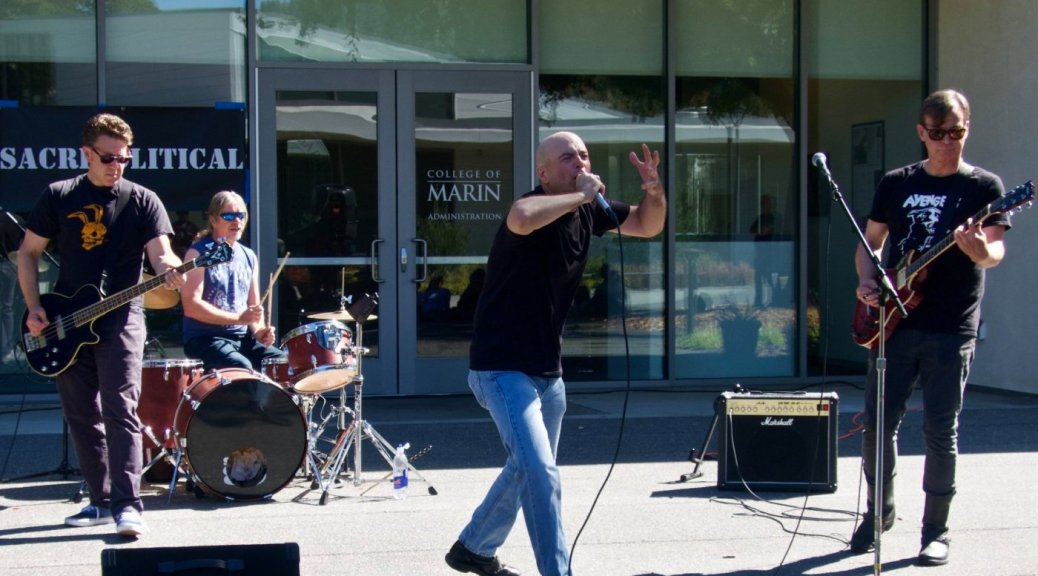 Sacripolitical were, and now are now once again, a hardcore punk band from Marin County, California. Formed in 1982, around their time of leaving High School in San Rafael. The band, whose name reflects the members’ irreverent attitude towards politics, played shows around the state right through the decade.

They first took to the stage at the Sleeping Lady Cafe in Fairfax in late 1983, as a three-piece. No amp; upturned plastic pickle barrels substituting for drums, and improvised,, shouted vocals – the stunned audience of hippies and punks didn’t quite know what to make of the young upstarts!

Vocalist, both then and now, John Marmysz, takes up the story:

“Back then, there was a very small, but very enthusiastic punk scene here in Marin County, California that has been sorely under-documented and over-shadowed by the San Francisco and East Bay scenes. There was a lot of raw creativity and rebellion, a good deal of trouble, lots of fun, and some sad tragedies.

“We played shows throughout the 1980’s on the bill with bands like Frightwig, Fang, Camper Van Beethoven, and The Pukes. We were interviewed on the Maximum Rock N Roll radio program, and in 1993 we recorded an EP titled ‘Peace: Under Our Supervision’ that was released on cassette.”

During the mid-1980’s, Sacripolitcal became a fixture at Marin County punk shows, frequently playing at the Sleeping Lady Cafe, various underground warehouse shows, and at the Flashback Cafe in Mill Valley, where the founder of “Cutting Edge Productions,” Mike Kavanaugh, dubbed them the house band.

Performances at the Flashback Cafe were frequent and rowdy. It was there that Sacripolitical appeared with bands such as Tales of Terror, Special Forces, Victim’s Family, Defend the Keg, Diet Tribe, The Pukes, and many, many others.

Often, Sacripolitical would hand out special “prizes” and “treats,” sometimes consisting of band pins and stickers, sometimes consisting of spent rifle and pistol casings. The shows went late into the evenings and were regularly interrupted by the police, who sought to silence what must have appeared to them like a riot waiting to happen.

John continues:
“Sacripolitical broke up in 1993 and everyone went their different ways, but by 2019 some of us – now old guys! – resettled in and around Marin and decided to start playing shows again. This, as it turns out, was bad timing as the pandemic hit in 2020 and live music venues went into hibernation.

“The pandemic killed a lot of bands, but we assembled some recording equipment, learned how to use it, and started writing new songs.

“In 2021 we recorded a 4-song, DIY EP and pressed a 7” 45 rpm vinyl record. The EP is titled ‘Pandemic Sessions, ‘ commemorating the conditions under which it was made. We’ve also been contributing songs to a number of punk charity compilations put out by 8 Up Records.”

You can hear, and indeed buy, the result of these sessions , here on Bandcamp. I particularly enjoyed ‘Gogol’s Nose,’ with the discordant saxophone giving a bit of an old school, No Wave kind of feel.

Hopefully, over the coming months, we can all get on top of the pandemic, and gigs will once again become more commonplace. Neighbourhoods need a vibrant local music scene, and while they may now be about thirty years older, I bet Sacripolitical can still do ‘vibrant’ with the best of them!