1977 saw punk music take a more melodic turn towards what would become popularly known as ‘new wave.’ Exponents would still harbour that old ‘F*** you’ attitude, but would express it with a smile rather a than a snarl.

One such band, and a big favourite of mine to this day, were Radio Stars. They wouldn’t claim to be the biggest of bands, but I’m sure everyone of a certain age will remember, their greatest hit, ‘Nervous Wreck.‘ (It tip-toed into the UK charts for three weeks in February 1978, peaking at number thirty-nine.)

It’s not that they were without pedigree – they had that in spade-loads. They were formed in 1976, when the initially heralded glam supergroup, Jet, split up a couple of years and one album into their existence. Vocalist Andy Ellison, who had previously been one of John’s Children, alongside Marc Bolan, former Sparks bass player, Martin Gordon and guitarist Ian MacLeod dusted themselves off and regrouped as Radio Stars.

By 1976, Glam had had its day, and the music press, always keen to pigeon-hole bands for convenience and order, decided the ‘new’ band were more New Wave than Glam or out and out Punk.

In April 1977, the band released their debut single ‘Dirty Pictures‘ on Chiswick Records, and a month later recorded their first session for the John Peel radio show.

This is when and how I first became aware of Radio Stars. I remember it so vividly – especially the track ‘No Russians In Russia‘ which later appear on the ‘Stop It’ EP.

Television appearances followed, the first reportedly being on Marc Bolan’s own show. (See – it sure pays to maintain your contacts, kids.)

The association with Bolan was also apparent on the B-side of ‘Nervous Wreck,’ Radio Stars’ flirtation with the charts in 1977 – ‘Horrible Breath‘ was written by him during his time with John’s Children.

The years of 1977 and 1978 seem to have been relentless. I have counted two hundred and eight gigs (as detailed in Martin Gordon’s brilliantly deadpan and self deprecating website.) There were two albums released, ‘Songs For Swinging Lovers,’ and the ‘Holiday Album,’ as well as five singles / EP.

Unfortunately, sales of the latter album were not on the same level as the debut . We music fans it seems, can be so fickle!

It would also appear from Martin’s website there was a bit of dispute within the band and Radio Stars subsequently faded, and died.

I was lucky enough to see them on 10th October 1978 at Strathclyde University, Glasgow – I got a pal who was studying there to sign me in. I must have seen hundreds of gigs in my time, but I can honestly say that there are very few that I remember as well at that one, almost forty-three years ago! 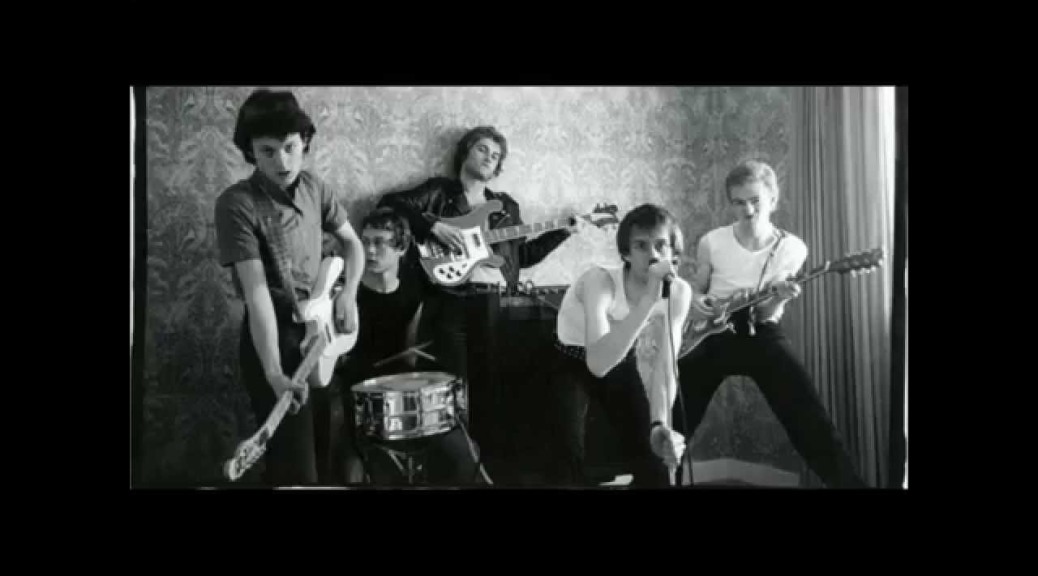 Formed in Dublin in 1975, Radiators From Space are credited with being Ireland’s first punk band, initially adopting the name Greta Garbage and The Trash Cans.

Their music is straight up, first wave punk – nothing too fancy, just high energy, angry but melodic, shouted gang vocals, over raucous guitar and drums with a predominant, throbbing baseline. At this early stage, the music still echoed influences of early Sixties rock ‘n’ roll / garage and like all classic punk songs, none overstay their welcome, and are short sharp and straight to the point!

The band were picked up by the excellent Chiswick Records label (more about them in a later post) and their debut single ‘Television Screen‘ was released in 1977.

Later the same year, their first album (and only LP under this particular name) was released, again on Chiswick Records. ‘TV Tube Heart‘ comprises thirteen tracks, over thirty-three fast, furious and fabulous minutes. You could say that the sound is standard ’77 punk noise, with tracks like ‘Ripped and Torn‘ reflected by The Rezillos and ‘Blitzin At The Ritz,‘ a bit Clash-esque in places.

By the time of the album’s recording, original vocalist, Steve Rapid, had left the band, to be replaced by Phil Chevron who would later move on to join The Pogues.

In 1978, the decision was taken to shorten the band name to simply, ‘The Radiators,‘ and their second album, ‘Ghostown‘ was released in 1979.

Over the years, there have been a few re-incarnations of the band and retrospective releases, but these are the only two albums of The Seventies.

(After leaving the band, Steve Rapid – real name Steve Averill – went on to become a successful design artist, famously responsible for producing U2’s album covers. He is also reportedly credited with suggesting the band changed their name from ‘The Hype.’)

(Steve Chevron sadly passed away in 2013)